his is a special feature from PAX Tech's October 2020 digital edition.

Visitors at the ANA Lounge at Haneda Airport had the chance to try the new lavatory door developed by the airline and JAMCO Corp.

In April, Katsunori Maki, Cabin Products and LOPA Manager at All Nippon Airways, was watching a news broadcast that featured a segment about a convenience store that had modified its refrigerators to allow shoppers to open the doors with their feet.

The broadcast coincided with the same ideas that planners at the airline had been batting around to create a touchless way for passengers to exit and enter areas of the cabin while keeping their hands clean. Soon, the airline hooked up with a well-known supplier of cabin products also based in Japan that had also been working on similar ideas. The two partners hammered out a design for a lavatory door, that the airline has been testing at its ANA Lounge at Haneda Airport in Tokyo and seeking comments from visitors.

ANA worked with JAMCO Corporation to develop a doorknob, which is really not a doorknob but a mechanism that can be levered open and closed with a passenger’s elbow. Development started in May, and by July a prototype was in the ANA Lounge. Until September of this year, the airline had collected feedback from more than 500 people who visited the lounge. According to ANA’s Products and Services Department, more than 70 percent reacted positively to the door concept, which has prompted the airline to move ahead installing the design on aircraft.

Adapting a lavatory can be done in less than an hour. To put the new system in place installers replace the lock knob and fix the door handle into the current “door pull” recess area with a screw.

With the touchless system installed passengers can open and close the door without touching the surface after washing their hands. Once installed, the airline expects the feature to be a permanent part of the aircraft cabin. 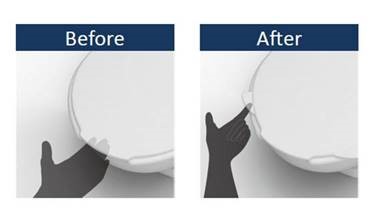 The toilet tab solution by JAMCO allows mitigated touch. It allows for a single finger to open/close the seat and lid

According to JAMCO, the company produces roughly 50 percent of the world’s aircraft lavatories. It is the sole supplier of lavatories for Boeing’s widebody aircraft. In addition to the touchless door for ANA, JAMCO has developed a touchless lavatory faucet. Now available for lavatories in the 787 is a JAMCO-developed touchless flush switch which is installed as standard equipment.