No time to sit

The OPERA seat from STELIA Aerospace launched in October

A busy Thanksgiving travel season was taking shape in the United States in late November, as passengers shunned warnings and moved through the airports by the millions, according to a report from the Transportation Security Administration (TSA).

What they encountered were airlines that have been taking great pains to ensure travel is as safe as possible, by innovating cabins for hygiene and cleanliness.

Also, a spate of news and announcements this fall show that development of new cabin solutions continues. Some are tied to the delivery of new aircraft. Others are a response to the same pressing requirements that have dogged the industry throughout the year.

One such solution was announced October 1 in the form of a new long-range Business Class seat for single-aisle aircraft by STELIA Aerospace. Though the OPERA seat is available in the Airbus catalog for all the aircraft in the A320 family, its most efficient use will be for one specific member of that family launched in the summer of 2019, says Emmanuel Regnier, Head of Sales and Marketing of Cabin Interior at STELIA.

“Following the release of the game-changing A321XLR, we started to reflect on a long-haul comfort seat for single-aisle platforms,” Regnier tells PAX Tech. This emerging trend on the business travel market was well taken into account during the design of OPERA — increased privacy for each passenger (separation between the passenger and their environment - crew, other passengers), independence (direct aisle access) and enhanced comfort (full flat bed, latest IFE embodiment with up to 20 inches screen) — are now proving to be even more important in the light of the COVID crisis with the promised increased use of long-haul narrow body aircraft by the airlines, he adds.

The OPERA is built for a long-range narrow body aircraft that STELIA expects to average roughly 12 seats in Business Class. Priorities from the beginning was developing the widest seat with a full-flat bed, a fully integrated door and ample storage areas. Adjustable armrests and ambient lighting were also in the design. OPERA’s overall weight makes it suitable for long distance flights and a simple design makes for easy integration in the cabin.

“Particular attention has been given to the interior trimmings of each seat with soft and warm materials, smooth mechanism and smart ergonomics, for a tailored and interactive passenger experience,” said a description of OPERA.

So far, Regnier says that the seat has had good feedback from potential airline customers, OEMs like Airbus and regular Business Class travelers.

“The Airbus order book gives a good indication of what this market can become tomorrow,” says Regnier. “OPERA is a product addressing the needs of the A321XLR and long-range platforms.”

Creating cargo solutions
While there is certainly a future awaiting long-range narrow body aircraft, another seating manufacturer is addressing more current and pressing needs of an airline on the West Coast of the United States.

At the end of November, Alaska Air Cargo began boarding a new in-seat stowage system developed by HAECO Cabin Solutions in Greensboro,North Carolina. With the new product, a narrowbody aircraft will now be capable of holding up to 13,500 pounds of cargo in the main cabin. 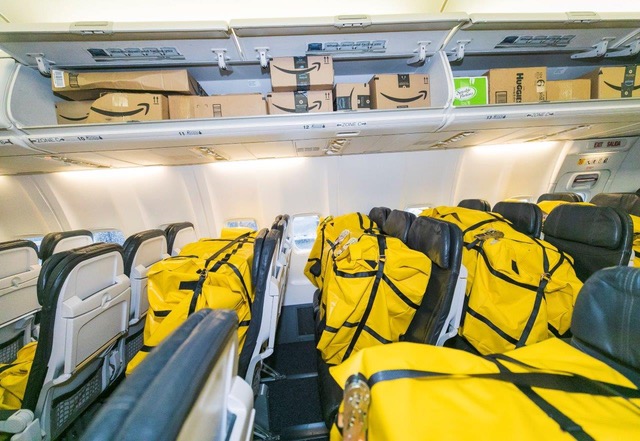 An additional 13,500 pounds of cargo can be stored in Alaska Airlines 737 cabins with the cargo product from HAECO Americas

The stowage system was one of the early developments by HAECO when the pandemic began demanding new solutions from suppliers. Alaska Air Cargo operates three 737-700s and flies more than 200 million pounds of cargo per year, more than 30 million pounds of that uplift is time-sensitive seafood. Alaska Air Cargo operates to 21 stations in Alaska, but only three that are connected by road. Many are in urgent need of additional service during a public health crisis.

Crew for the flights are two pilots and two cargo load agents. The agents oversee loading, ensure proper tagging, and provide fire suppression and safety of cargo within the in-seat package stowage system.

HAECO has been Alaska Airlines’ provider of heavy maintenance and reconfiguration work for more than a decade, says Doug Rasmussen President and Group Director of HAECO Cabin Solutions.

The products moved from concept to offerability in less than a month. The palletized variant can hold 1,000 pounds, the all-in-one seat frame can hold 500 pounds, and the seat and floor storage systems can each hold up to 240 pounds.

Other more conventional plans are in the works, Rasmussen tells PAX Tech. “HAECO will be announcing more details about our Vector Light seat soon,” says Rasmussen. “This will be a fully featured Economy Seat which will start at less than eight kilograms per passenger. Living space and comfort are the best in class, without increasing weight or sacrificing reliability.”

The SL3710 from Recaro Aircraft Seating

Launch customer
In the middle of November, KLM Royal Dutch Airlines came through with a massive order for the SL3710 Economy Class seat for its Embraer and Boeing aircraft. More than 5,500 copies of the SL3710 will be line fitted on the 737-800s and retrofitted on a number of Embraer E190s.

The SL3710 is the newest addition to Recaro’s Economy Class line. Weighing in at eight kilograms, the seat is designed for short- and medium-haul flights of the type operated by KLM Cityhopper. The airline has selected a version of the SL3710 with an adjustable headrest.

“Not only is this our first step into the regional aviation sector, but it’s also the first time Recaro has outfitted Embraer aircraft,” said Dr. Mark Hiller, Chief Executive Officer and Shareholder at Recaro Aircraft Seating. “This is not an opportunity we take lightly, and we look forward to continue pursuing our vision of ‘driving comfort in the sky.’”