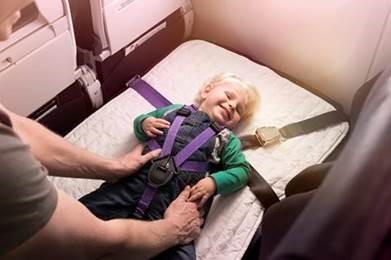 The new infant harness option for the Economy Skycouch

First introduced in 2011, the Economy Skycouch converts into an area that can be used for resting or play during long-haul flights. The product now offers a dedicated harness and belt into which caregivers can strap infants throughout the cruise phase of their journey. The inclusion of an infant pod also provides an extra level of comfort for the tiniest of travelers.

In addition, the Skycouch Cuddle Belt, previously only certified for two adults or an adult and child, has also been updated so two children lying side-by-side can use the option safely.

“The Skycouch has proven to be a real game changer in the Economy cabin. While we initially marketed it to couples, we quickly found the product suited parents with young families especially well. Parents can relax while their children are able to have their own space and flat area to play without interrupting other passengers," explained Anita Hawthorne, Air New Zealand General Manager Customer Experience. “Through this process, we’ve spoken to many customers who have traveled on the Skycouch and their feedback has helped to inform the updates and refinements we’re introducing this year.”

The modified Skycouch product will be phased into the airline's 777 and 787-9 Dreamliner fleets following certification and regulatory approvals. Offshore airlines that have licensed the Skycouch from Air New Zealand will also be offered these improvements in the future.

For a closer look at the family-friendly option, visit Skycouch at AIX Hamburg this coming April.