Morning speakers dwell on transport's future in many forms 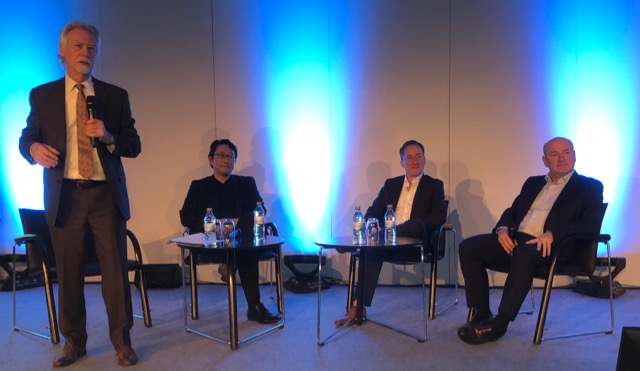 HAMBURG — While many of the 20,000 people who will touch down here this week will be spending hours dwelling on the minutia of the workings in an aircraft cabin, the collection of morning speakers and panel discussions that kicked off Passenger Experience Week had ambitions that reached anywhere from daily lives of ordinary consumers to the outer reaches of the Earth’s atmosphere.

Plans large and small are taking place amid the changing digital lives of consumers. It was the overriding theme of the morning session of the Passenger Experience Conference that kicked off the start of the Aircraft Interiors Expo and the World Travel Catering and Onboard Expo that will run through Thursday.

And though the topics did not exactly match the day-to-day work lives of the people attending, a number of lively sessions drew interest and questions enough to fill out time and provided examples of rapid convergence of the consumer world with the ambitions of airlines to serve their customers now and in the future.

The morning sessions touched on the ever-growing interest in a future world where daily life will mean interactions with autonomous vehicles and drones that deliver everything from packages of fresh produce to human passengers who fly above the drudgery of traffic. Richard Chung Vice President, Innovation and Seating at Adient was part of a panel discussion the opening morning joined by Adam Wells, Head of Design at Virgin Galactic and Paul Priestman, Director and Chairman of PriestmanGoode. Emery Blake Director of Differentiation Strategy at Boeing Commercial Airplanes moderated the session.

Chung’s company, Adient, is staking out a future in the aviation industry, signing an agreement early this year to work with Boeing. The two companies launched a joint venture in January called Adient Aerospace.

“The joint venture between Boeing, the world's largest aerospace company, and Adient, the global leader in automotive seating, addresses the aviation industry's needs for more capacity in the seating category, superior quality and reliable on-time performance,” said a January release on the formation of the new company.

The partners are still in the midst of obtaining regulatory approvals for the joint venture. However, plans are to make use of Adient’s expertise in automotive seating that has grown the company to 230 locations in 34 countries.

However, Chung dwelt little on the company’s plans for aviation and instead turned his focus to Adient’s core competency, automotive seating and the role it will play in autonomous vehicles in all stages of development.

“The seat will become the command center where you will experience many things,” said Chung. In the timeframe of between 2025 and 2030 Chung said up to 40% of the vehicles on the road will be self-driving.

“In five years, you will not see internal combustion engines being produced,” he added.

While there is no clear timeline for passenger service, work is continuing apace at Virgin Galactic, said Wells. Recently a test flight took the spacecraft to a height of 82,000 feet. The 600 passengers currently signed on for space flight will experience weightlessness in a sub-orbital flight of 320,000 feet once Virgin Galactic’s SpaceShip2 becomes operational from Spaceport America in the New Mexico desert. Products are still being developed for the ships, many of them in weightlessness.

In addition to design of the cabin, Wells said there is also considerable work taking place at the Space Port where passengers will undergo three days of training.

Priestman’s contribution echoed much of the well-known design house’s role in the aircraft cabin that has made it a sought after contributor to some of the most attractive and innovative aircraft cabins currently flying. Priestman stressed the need for airlines to create consistency of designs throughout the passenger experience process to give their customers a feeling a comfort, security and confidence.

Too often, Priestman said passengers “get lost” in the airport experience.

PriestmanGoode is clearly involved in designing other experiences as well. The company is working in the development of hyperloop maglev passenger travel and designing systems for freight logistics for Chinese rail service. If that wasn’t enough, its concept of a drone delivery system for Hong Kong punctuated a morning of forward-looking concepts in various stages of advancement.