This is a special feature from PAX Tech's AIX Hamburg June 2022 issue, on page 12. The first week in May, the airline that dubs itself “the national carrier of the United Arab Emirates” operated more than 40 flights to test operational efficiencies, technology and procedures that are designed to reduce carbon emissions.

The program conducted by Etihad Airways coincided with the international observance of Earth Day, and airline officials said the maneuvers could be the most extensive sustainability flight testing program ever conducted. Most of the tests involved flight operations. Testing variable speed during cruise, reducing flaps at landing, decreasing taxi time, and, in a symbolic act for Earth Day, cutting cabin lights for one minute.

However, many of the airline’s latest efforts will touch the passenger in more direct ways. The most recent example is the delivery of its newest aircraft, the A350-1000, which is front-to-back a nod to efforts by the industry to tackle the challenges of operating more sustainably and is now being prepared to join the airline’s long-haul fleet with flights to the United States. At the end of March, the first flight of the Sustainbility50 from Abu Dhabi took selected passengers on a launch route to Paris. Inside the aircraft was a design effort focusing on privacy, technology and the latest energy saving features. Etihad is operating the aircraft on short to medium haul routes to familiarize the crew with its operations and build up the necessary hours in the cabin.

The Sustainability50 program was announced at the Dubai Air Show in 2021. Powered with a Trent XWB engine from Rolls Royce the wide-body burns approximately 25 percent less fuel and CO2 emissions than twin-aisle aircraft of previous generations.

“Etihad’s work with partners, including Boeing, GE, Airbus and Rolls Royce supports the organization strategic objectives to achieve a 20 percent reduction in emissions intensity in its passenger fleet by 2025, cut 2019 emissions by 50 percent by 2035 and reach zero emissions by 2050,” Vincent Frascogna, Vice President, Americas at Etihad Airways. 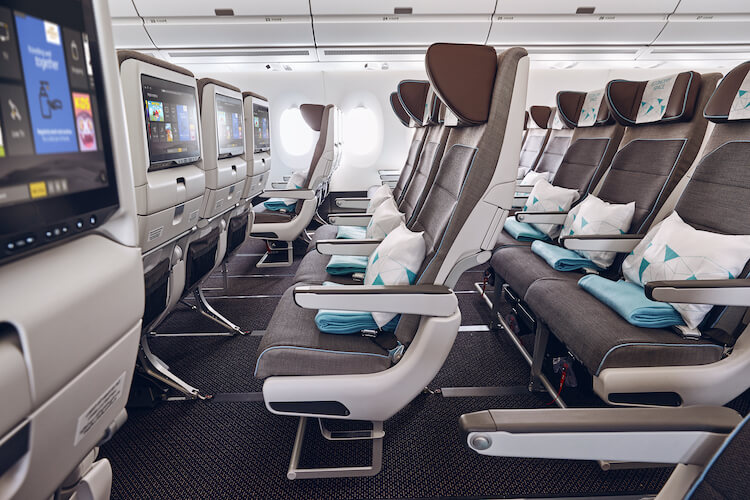 Etihad is also continuing its work with Boeing on its Greenliner program allowing its entire fleet of 787s to be used as flying testbeds for a range of sustainability initiatives by Etihad and its industry partners. Boeing is working with Etihad in a comprehensive research program, that started with a delivery of a new signature 787, specially themed to highlight the sustainability partnership of the two companies.

Through the years of 2020 and 2021 Etihad worked the Greenliner program, implementing sustainability initiatives which it tested and developed. In October of last year Etihad flew its most sustainable flight reducing its CO2 emissions by 72 percent in absolute terms compared to an equivalent flight in 2019.

In the front cabin of the new A350-1000, inspired by the shadows case by the emirate’s palm trees, is an emphasis on a look that simulates natural light. A “dark-mode interface” on the inflight entertainment system has been designed to reduce light pollution within the aircraft. Forty-four passengers can fit in the Business Studio with privacy features, wireless charging, Bluetooth pairing and 18.5-inch monitors. Etihad has selected a customized version of the Super Diamond seat by Collins Aerospace for the Business Class cabin of the A350-1000 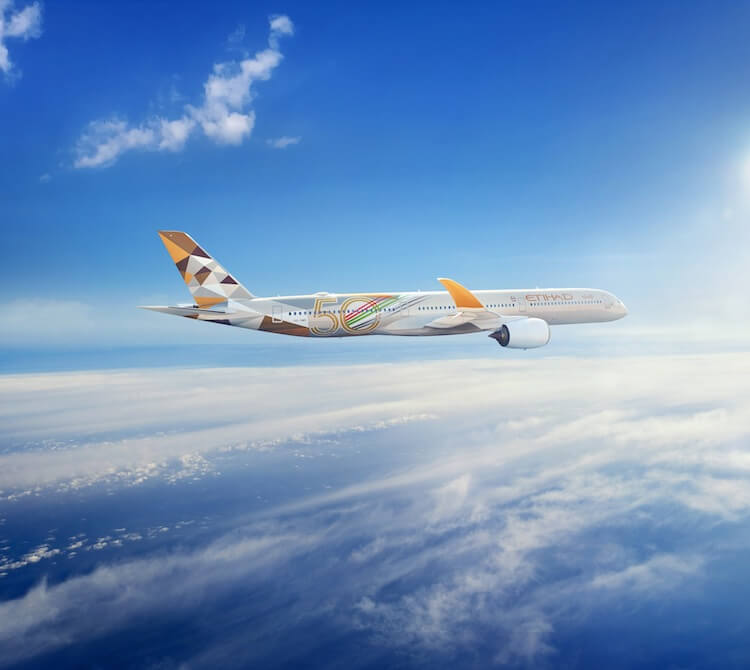 The Sustainability50 A350-1000 took its first flight in March

In Economy Class the 3-3-3 configuration brings additional comfort and legroom with CL3710 seat from Recaro Aircraft Seating. Etihad officials say the seat was selected for its reliability and minimal maintenance costs. Passengers in Economy Class have a 13.3-inch monitor and a fixed wing head rest which weighs in at 51 kilograms for triple seat. The seats are produced at Recaro’s facility in the United States.

Etihad has initiated several sustainability programs for the aircraft cabin in recent years and plans more before the end of the year. The airline has replaced magazines and manuals with electronic versions and has transitioned into digital boarding passes. In 2019 Etihad committed to removing 80 percent of its single use plastic from its cabin operations by the end of this year. 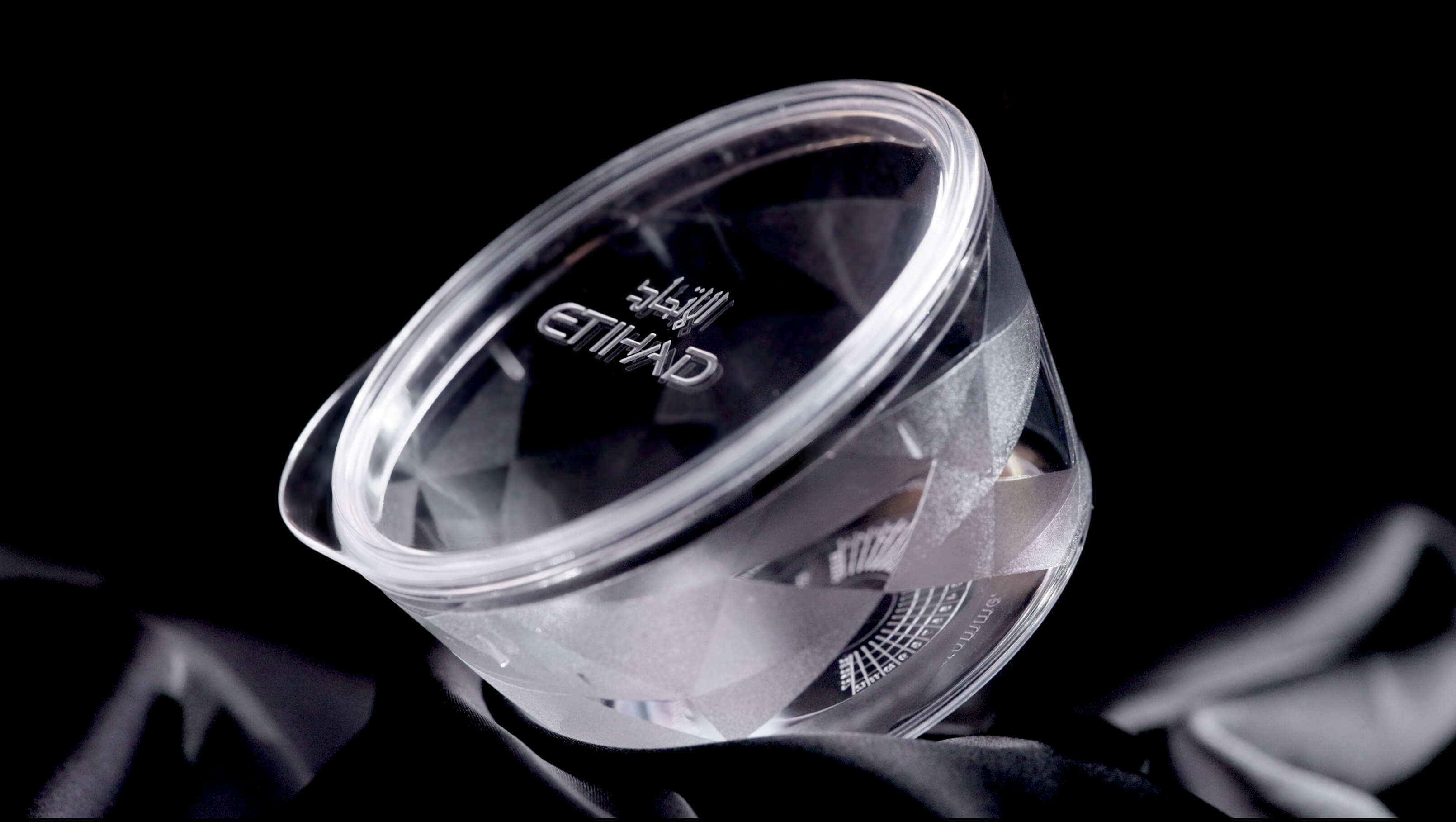 By the end of 2022 the airline will have done much to achieve a plastic free cabin with a bold plan to bring back rotable tableware with the help of supplier deSter. Many of the products are made from high-quality recyclable plastic. The trays, serving plates and lids are part of what the airline said is a “closed-loop recycling system.” At the end of their lifecycle they are collected, washed, ground and reused to make replacement products. The airline will also return to stainless steel cutlery in Economy Class.

Also in the cabin, will be Etihad’s efforts to use technology to calculate the amount of what usage on each flight, to reduce consumption.

In addition to the many supplier and airframe builders Etihad works extensively with the UAE government. The Environmental Agency – Abu Dhabi has supported its single-use plastic reduction efforts with the Ministries of Climate Change/Environment and Ministry of Energy is working with the airline to transition to cleaner fuels. Tadweer, Abu Dhabi’s Center for Waste Management is working with the airline to source alternative fuels from waste. Semi-government entities such as Agthia have also supplied the airline with products and services.