Women front and center at Swissport 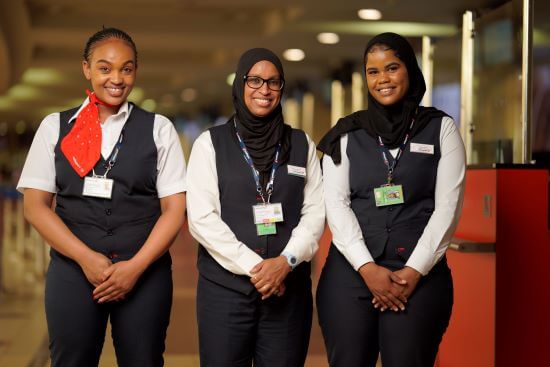 A 12 person team at Jomo Kenyatta International Airport in Kenya is working Lufthansa flights between Nairobi and Frankfurt, both of which are operating with all-female flight and cabin crews, and in San Francisco, two all-women operations (control center and cabin cleaning teams) are on duty on the tarmac.

While women make up the majority of Swissport's lounge staff and almost half of the aviation security and centralized load control staff, women remain underrepresented in the company's classic airport ground services and cargo handling units, reads the March 8 press release from Swissport.

"At the end of 2021, 34.2 percent of Swissport's ground handling employees were women. In the more than 100 Swissport air freight center around the world, 28.6 percent of the workforce was made up of women," it reads.

"We are looking for 30,000 people to join our company worldwide by the end of the year. These are primarily frontline positions in passengers services - check-in, gate - and ramp handling such as aircraft-towing, fueling, baggage handling an de-icing services," says Christopher Rayner, Swissport's Chief People Officer, adding that "we want to appeal to all genders and support women in their careers, especially in technical areas, such as aircraft maintenance, where women currently make up only a small percentage of the workforce."

Rayner said the company is committed to having women in management positions.