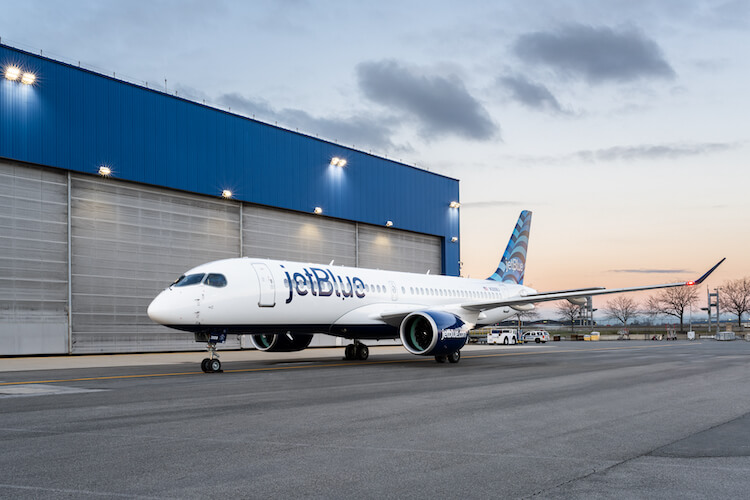 JetBlue has added 30 additional A220-300 aircraft to its order book, bringing the total number of A220s in the airline’s fleet and on order to 100.

“We’re already seeing benefits from the eight A220s we’ve added to the fleet and we’re very happy to have more on the way,” said JetBlue CEO Robin Hayes in a February 15 press release. “We’ve seen double-digit increases in customer satisfaction scores, and these fuel-efficient aircraft support our leadership in reducing carbon emissions. With 30 additional A220s on order, we’re in a position to accelerate our fleet modernization plans to deliver stronger cost performance and support our focus city network strategy.”

In 2018, JetBlue announced its initial order of 60 A220s and the option for 60 additional aircraft. JetBlue converted 10 of 60 options to firm orders in 2019, and the 30 A220s announced today will enable acceleration of the retirement of JetBlue’s Embraer E190 fleet.

“It is very rewarding to see a happy customer coming back for more aircraft not even a year after entry into service of its first A220. We salute our friends at JetBlue on this landmark deal,” said Airbus CCO and Head of Airbus International Christian Scherer. “Over 700 A220 orders to date underscore the strong market appetite for this all-new single aisle aircraft.”

According to the release, the A220 offers nearly 30 percent lower direct operating costs per seat compared to the fleet it is replacing, supporting the airline’s focus on keeping costs low. Additionally, the aircraft’s range and seating capacity will add flexibility to JetBlue’s network strategy as it targets growth in its focus cities, including options for transcontinental flying and opening the door to new markets and routes not feasible with the airline’s existing fleet.

Future of the Fleet

JetBlue’s first A220 aircraft arrived in December 2020 and the airline is on track to take delivery of its ninth A220 this month. Nine more are scheduled for delivery in 2022, followed by another 21 in 2023.