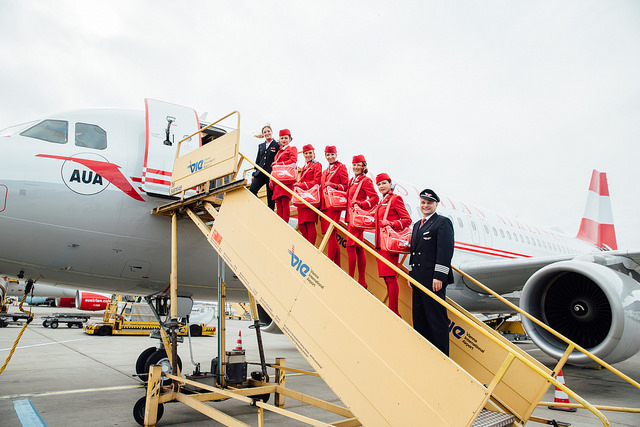 “Over the decades Austrian Airlines has emerged as an Austrian flagship company and an important ambassador of our country. Each day Austrian Airlines carries our red-white-red culture and hospitality throughout the world and brings millions of guests to our country. It is wonderful to have this privilege to see that ‘our AUA’ can celebrate and also grow again," said Chancellor Kurz.

Minister Hofer also conveyed his well-wishes, saying: "I also wish Austrian Airlines all the best on its 60th anniversary of its founding. Austrian Airlines is an important employer in the eastern part of Austria and a driver of the domestic economy and tourism. The third runway at Vienna Airport will provide Austrian Airlines with further development and growth opportunities.”

2018 also marks the 10th anniversary of Austrian becoming a member of the Lufthansa Group.

The airline's latest 777 long-haul aircraft was named by the Federal Chancellor and his host, Austrian Airlines CEO Kay Kratky, at the event to mark the occasion: “Sibanye", a South African word meaning "We are one." The aircraft was decked out with a special livery to commemorate the anniversary, with a large 60 on the right side of the aircraft and two people in flying postures on both sides, three images that are comprised of 2,300 individual pjhotos of Austrian Airlines employees.

The airline has also published a book in conjunction with its 60th birthday. The German title, translated to mean "A Smile Flies Around the World. A Journey Through the History of Austrian Airlines", is available in bookstores and in Austrian's Jetshop.