SATS' technology in the tropics

This is a special feature from PAX International's 2022 May Asia-Pacific digital issue, on page 10. 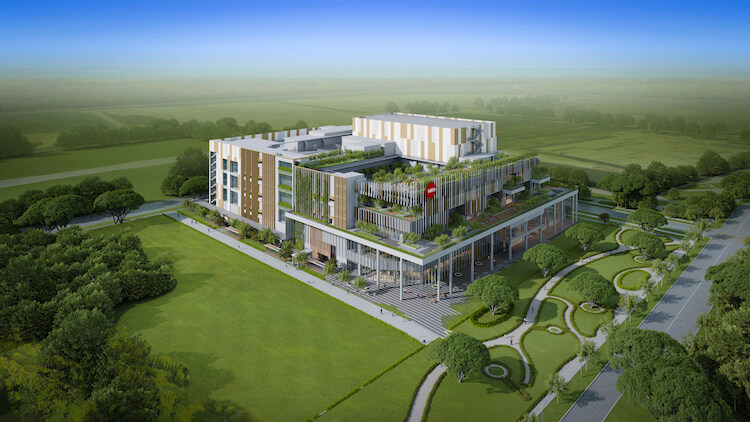 The SATS Food Hub is slated for completion in 2024. Photo Credit: SATS

The SGD$150 million (US$110 million) facility is located in Singapore’s Jurong Innovation District. At the heart of what will be called the SATS Food Hub will be an emphasis on technology and robotics incorporated into large-batch meal production when the facility is completed in 2024. Plans also call for SATS to expand its existing Global Innovation Centre into the hub, welcoming food technology startups, small- and medium-sized enterprises (SMEs) and education.

“The move aligns with SATS’ strategy to strengthen its Singapore core while growing international and non-travel businesses,” said an April 7 release from SATS.

The Food Hub will rely heavily on automation in its large-batch production. Heretofore manual processes such as meal assembly could be handed over to robotic finger grippers and automated dispensing units for various food components. Such automatic could produce up to 200,000 packed meals per day.

“Automating our meal production processes changes the landscape significantly to benefit our customers, suppliers and business partners,” said Kerry Mok, President and Chief Executive Officer of SATS Ltd, in the April announcement of the Food Hub. “It will enable us to implement high-tech food production to achieve cost efficiency, strengthen operation resilience and create greater opportunities for upskilling our people.”

“SATS will be the first food player to join a growing community of innovative companies in the district, said Tan Boon Khai, Chief Executive Officer to JTC. “We look forward to collaboration between SATS and the Jurong Innovation District community to create new and exciting products sustainably by leveraging the latest technology.”

Leveraging technology has been a SATS hallmark for several years. Long before the COVID-19 pandemic hit, SATS was investing in new technologies in the form of robotics and other solutions in the airline catering units and airport operations. In the spring of 2017, SATS committed to investing S$110 million (US$78 million) in an open innovation concept, TechnIC@SATS, to drive improvements in automation for the company’s units at its headquarters and beyond.

“A Digital Twin is a replica of a product or process,” said a description from SATS “By bridging the physical and virtual world, data is transmitted seamlessly allowing the virtual entity to exist simultaneously with the physical one.”

Food processing and production technologies will be found throughout the Food Hub. There will be an RFID-enabled load and tracking inventory system for raw materials. The automation for the bakery production center will require minimal physical labor and have the ability to produce 3,500 pieces of bread per hour.

In another part of the Food Hub, food products made using retort processing technology known as “retort pouches” will be stacked and loaded onto racks with an automated shuttle system. In an 18-hour operation the system is expected to produce up to 27,000 kilograms of food products.

Cartons and boxes of various sizes can be formed from a single machine at the rate of 10 to 18 per minute. Information on the contents are fed into a data system for inventory control and accuracy.

Another feature will be a line that dishes food bento style at the rate of 6,000 trays per hour.

Following and tracking it all will be an Internet of Things (IoT) platform that harvests real time data from operating equipment that can be analyzed for good manufacturing practices and overall equipment effectiveness. The RFID transport system tracks more than 2,000 data points per second.

“Such digitization eliminates the manual input of information and enables quicker generation of reports,” said a description from SATS.