This is a special feature from PAX International's December IFSA Long Beach 2021 digital edition, on page 16. In a small area of green, adorned with southern redbud trees, flowering shrubs and butterfly bushes near the international terminal at Hartsfield-Jackson International Airport in Atlanta (ATL) are two beehives that airline caterer Newrest maintains with the help of a local company.

The honeybees travel for miles a day in search of nectar and pollen. By next spring Newrest hopes to harvest an average of 40 pounds of honey from each of the hives – depending on weather and other factors. Newrest has a similar project going in Canada with the help of a beekeeping business in Montreal.

While the honey harvested will not satisfy much of the company’s catering needs, Newrest has a different goal in mind with the hive maintenance. Urban beekeeping operations benefit the ecosystems by supporting the growth of trees, flowers and plants in the area. The practice has been growing over the past several years as the movement toward buying and sourcing local food has become popular; and bee populations have become threatened.

Nicolette Golde, Key Account Manager at Newrest, frequently joins up with Brooke Vacovsky of a company called Southeast Beescapes. Every couple of weeks the hives are inspected, and a few employees are invited to view the process. The hives are opened to check the wellbeing of the queen bee and how much honey is being produced. The hives were installed on airport property last April and join other hives installed around the facility that are maintained by Delta. 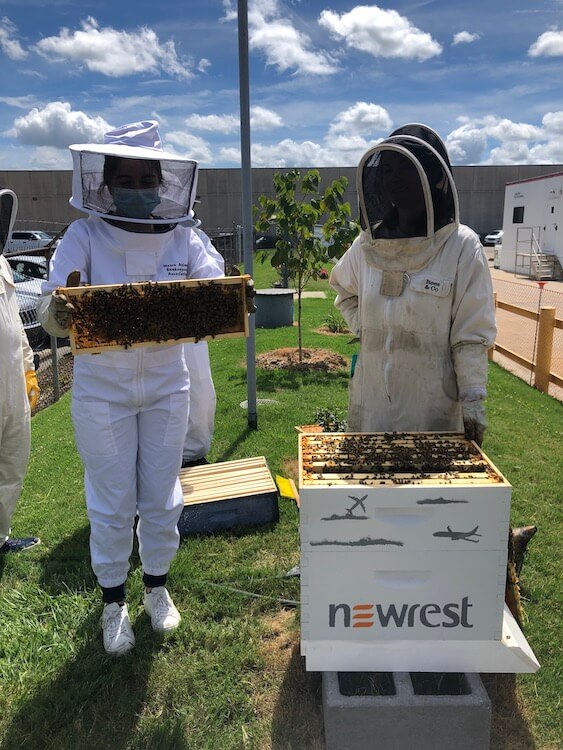 “We actually did take out one frame of honey which weighed about five pounds. We took it into our cafeteria and shared it with our staff and did a bit of a taste testing,” says Golde. So far, the caterer plans to share the honey harvest in the spring by distributing small jars to employees and also with Delta, its main customer in Atlanta.

During the sessions, Vacovsky says she assures visitors that they are perfectly safe around tens of thousands of buzzing bees. Interest has been high among company employees, and some have asked Vacovsky what it takes to set up a home beekeeping operation.

“I am very grateful for them,” Vacovsky says of the interest she’s seen from Newrest employees.

A similar scene is taking place at Newrest’s operation near Montreal-Pierre Elliott Trudeau International Airport (YUL). There, Newrest is working with a company called Alvéole in a similar way. The first harvest of honey in Montreal took place in early September. Newrest gave visitors to the Air France lounge the opportunity to taste some of the honey, and jars were also donated to a foundation formed by Air Canada.

Beekeeping is part of Newrest’s long-term sustainability goals spelled out in the company’s Corporate Social Responsibility Charter with objectives reaching out to 2025.

Among the company’s emphasis over the next four years are: fighting food waste, waste reduction and recovery, responsible purchasing, reducing its carbon footprint and strengthening commitment to employees.

“We are taking action in the areas that matter, with the humility and efficiency that characterize us. To this end, we have adopted strong and concrete commitments that will make a real-life impact, extending well beyond our already ambitious business and objectives,” said Olivier Sadran and Jonathan Stent-Torriani Co-CEOs of Newrest, in the introduction to the 26-page outline of the company’s plans.

In addition to firming up its corporate responsibility goals, Newrest is moving quickly into the airline catering industry in the United States, since it set up its first operations in 2018. Starting in November, it began serving United Airlines at the carrier’s Houston hub. Newrest is operating the former Chelsea Catering kitchen that was part of the United’s operations for many years.