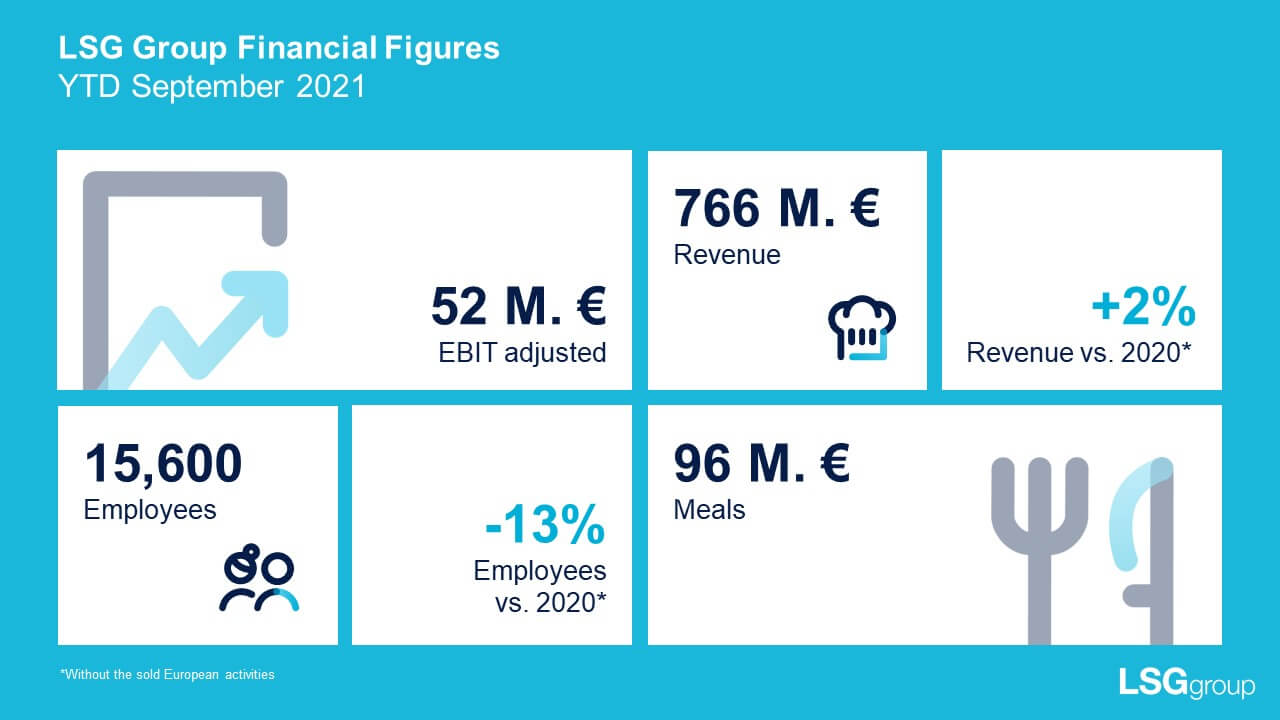 The effects of the COVID 19 pandemic had a lesser impact on the LSG Group in the third quarter of 2021 compared to 2020, the company reports. LSG Group revenue increased by 88 percent in July, August and September compared to the same period last year. For the calendar year revenue was €766 million (US$884 million) compared to €1,060 million (US$1,224 million), a decrease of 28 percent.

“However, it is important to consider that the economic consequences of the pandemic on global airline customers became apparent only after March 2020,” said a release from LSG Group. “Excluding the European business, which has since been sold, the LSG Group's revenue actually increased by two percent in the first nine months.”

"We have significantly reduced our operating expenses with cost reductions in all areas," explained Dr. Kristin Neumann, CFO of the LSG Group, referring to CARES Act grants in the U.S., tied to the continued employment of staff and were used accordingly for wage and salary payments. "In the North American airline-catering market, we are seeing business pick up again and additional orders are reaching us in the convenience-retail sector. The Asia/Pacific region is still suffering badly from the corona crisis. Nevertheless, I am optimistic that we will soon see a global upward trend as soon as travel restrictions are further eased. I believe our company is well-positioned for this."

The number of employees as of September 30, 2021, fell by 39 percent year-on-year to 15,637 (previous year: 25,655), with around 7,700 departures related to the sale of the LSG Group's European business. The company produced 96 million meals in the first nine months, the same volume as in 2020, but excluding the divested European operations and about 60 percent less than in 2019.

Retail inMotion, the LSG Group's brand for inflight retail programs and digital solutions, launched its collaboration with Eurowings Discover. The Lufthansa Group leisure carrier not only offers its guests food, beverages and boutique products with the help of Retail inMotion, but also relies on the company's expertise to provide a fully digital in-flight magazine.

"This project shows the direction in which our industry is developing," said Erdmann Rauer, CEO of LSG Group. "We want to further expand our digital offerings in the future and ensure that they significantly improve the passenger experience for even more airlines worldwide. To this end, our Airline Catering and IT & Digitization business units are working hand in hand to offer our customers precisely tailored, innovative ideas."

In the traditional catering business, LSG Sky Chefs also celebrated a business success with the extension of its partnership with LATAM Airlines at four locations in North, Central and South America. The LSG Group's Ghost Kitchen project also made progress: Following a successful pilot in Miami, the concept was extended to several other U.S. locations.

Additionally, similar initiatives were also launched in Hong Kong and the Baltic States. In the area of food commerce, the company extended its contract with convenience-store chain Circle K in the Phoenix, Arizona, market and renewed a partnership with meal-kit supplier HelloFresh in New York.

In line with the LSG Group's three sustainability priorities – People, Planet, Prosperity – the company held its first virtual Gender Equality Roundtable. Participants from around the world exchanged ideas on how to further strengthen gender equality in the company. Meanwhile, Retail inMotion launched vLPS, a digital solution for avoiding food waste that uses scientifically collected data to automatically calculate the efficient loading of aircraft on specific routes.