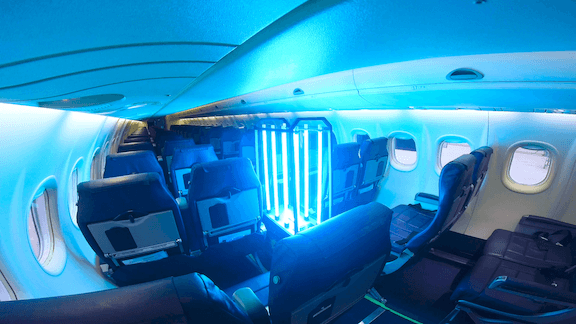 The RAY robot is compact and self navigating

The Aero HygenX “RAY” robot is a compact, lightweight and self-navigating device that uses motion-sensing technology to navigate interior spaces — disinfecting surfaces with a UVC light.

Avelo uses the RAY robots as part of its daily disinfection of its six 737 aircraft. Additionally, RAY is used to disinfect Avelo’s crew workspaces at the airline’s West Coast base at Los Angeles’ Hollywood Burbank Airport (BUR) and its East Coast base at Southern Connecticut’s Tweed-New Haven Airport (HVN). The aircraft and airport disinfection routine occurs every evening following the completion of each day’s flight operations.

“We are excited to be on the leading edge of helping prevent the spread of COVID-19 and other viruses among the flying public,” said Avelo Chairman and CEO Andrew Levy in a release from the airline. “The safety and wellbeing of our customers and crewmembers is our top priority. Our partnership with Aero HygenX bolsters this commitment with the use of their innovative disinfection technology on our aircraft and at our bases. RAY is a safer, faster, more cost-effective and more sustainable solution than the conventional chemical-based manual disinfection process used by most other airlines.”

UVC technology has a long and proven history of effectively disinfecting surfaces, air and water in many other industries, including the healthcare, food and beverage and hospitality sectors. Aero HygenX is the first company to incorporate UVC disinfection technology into an autonomous robot solution for the transportation industry. In addition to commercial aircraft, RAY can be used to disinfect buses and trains.

“We couldn’t be more excited to announce that America’s first new airline in nearly 15 years is utilizing RAY,” said Aero HygenX CEO Arash Mahin. “Avelo’s partnership with Aero HygenX will enhance its aircraft and airport disinfection regiment, and exemplifies the airline’s commitment to safety, reliability and innovation. We look forward to growing with Avelo as they add aircraft, bases, Customers and Crewmembers in the future.”

RAY’s light-emitting technology safely destroys up to 99.9 percent of harmful pathogens in the air and on the surfaces of Avelo’s aircraft cabins, galleys, lavatories and flight decks – as well as in workspaces at the airline’s BUR and HVN bases. RAY’s automation technology enables the robots to be operated remotely by a single crew member — the previous manual chemical-based disinfection process required several crew members to sanitize each aircraft. The time it takes to complete the disinfection of Avelo’s three 737-700s and its three 737-800s is also significantly reduced by using the RAY robot. Avelo has committed to adding nine additional 737 NG aircraft in 2022 — expanding its fleet to 15.

RAY is connected to HygenXStream, a real-time digital platform which enables Avelo to monitor the health of RAY and gain access to valuable metrics that can assist with decision making for its operations.

There is significant science validating the effectiveness of UVC exposure to render pathogens — such as COVID-19 — inactive. UVC disinfection is a function of intensity over time. RAY’s smart functionality consistently delivers the perfect dose of UVC light to eliminate pathogens onboard an aircraft. At the same time, RAY moves unguided through the aircraft cabin eliminating the need for an Avelo crewmember to be onboard while it’s in use.