AIX Virtual: Whither the interiors market? 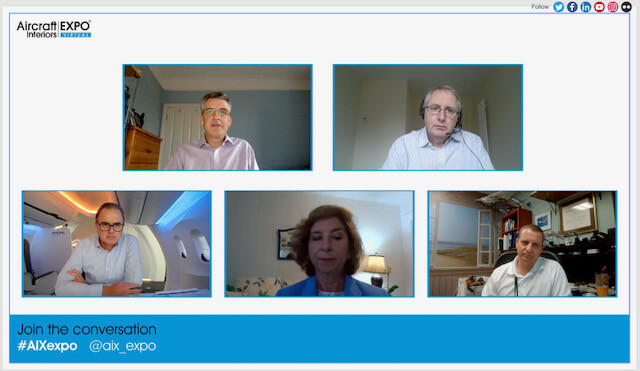 Though signs pointed to a noticeable upturn in commercial aviation capacity and passenger traffic, there appears to be still too many unknowns to say that airlines and the companies that supply them with interior products services are on the road to full recovery any time soon.

And the return of any type of business that existed before the COVID-19 pandemic is dependent on a return of business travel and an end of travel restrictions by individual nations.

Those hurdles and possibilities were pondered at a virtual panel discussion at the Aircraft Interiors Expo Virtual which opened yesterday, along with the World Travel Catering and Onboard Services Expo Virtual. The panel for The Commercial Aviation and Interiors Market Outlook was moderated by Andrew Doyle, Senior Director of Market Development at Cirium. Panelists were Rob Morris, Head of Consultancy at Ascend by Cirium; Harald Mehring, Chief Customer Officer at Diehl Aviation; Gary Weissel, Managing Officer at Tronos Aviation Consulting and Beth de Young, Vice President Business Development, Lease Customers at Safran Group.

The session was recorded September 1 and made available for AIX and WTCE Virtual registrants September 14.

Many scenarios, variables and possibilities for a return to travel and business at 2019 levels were in Morris’ outlook for the years ahead, but any success in 2022 and 2023 depends greatly on the amount of vaccines available worldwide, a faster economic recovery and a pent-up demand for leisure travel. Also affecting a 2022-23 rosy picture in Morris’ scenario would be an elimination of a worldwide fleet surplus and a possible increase in OEM production next year.

Should several of those things not occur, and, most importantly, continued unilateral border restrictions, the Ascend by Cirium forecast pushes industry recovery out to late 2024 and early 2025. Long term demand for passenger jets currently sits at more than 15,000 over the next 10 years.

“The current indicators are largely signaling positive trends, but recent (COVID) cases in China and U.S. and Europe are causing some near-term concern,” Morris concluded. “We should be prepared for one step forward, one step back for some time to come.”

Weissel pointed to a number of positive factors, one of which was a continuing robust demand for air cargo. Traditional retrofit programs that were planned before the pandemic are starting to resume. For example, he said United Airlines has begun making installations of its Polaris premium cabin. Tronos was recently awarded a consulting contract on a fleet retrofit, the first one in more than a year, Weissel said.

Temporary passenger-to-cargo modifications are still taking place, and Weissel said easing of regulations surrounding the use of the combination cabin will probably be extended beyond the end of December. Still, Tronos and its partners pushed its beginning recovery forecast out to late 2024 and early 2025. From now to 2025, Tronos forecasts a total spend for retrofit interiors (seating, IFE and galleys and other interior components) at approximately US$18 billion, which is more than 50 percent less than its pre-pandemic forecast.

“You forecast down today, [but] things change next week and your forecast changes, so it's really difficult to forecast over this period,” Weissel added.

Discussion covered a range of topics including activity in the aircraft leasing market, demand for touchless cabin products. Some recent business that de Young noted for Safran was supplying airlines with lavatory oxygen systems, which must now be outfitted on older aircraft.

Ownership of aircraft being delivered is shifting to leasing companies, said de Young. In mid 2020, 46 percent of the aircraft were owned by lessors and de Young said that trend should continue with lessors owning up to 60 percent. Lessors like standardization in the aircraft cabin, said de Young, because it makes it easier to lease aircraft. Modular aircraft components like Safran’s MaxFlex lines galleys, which can be easily reconfigured, will become more important as airlines try to differentiate their cabin product.