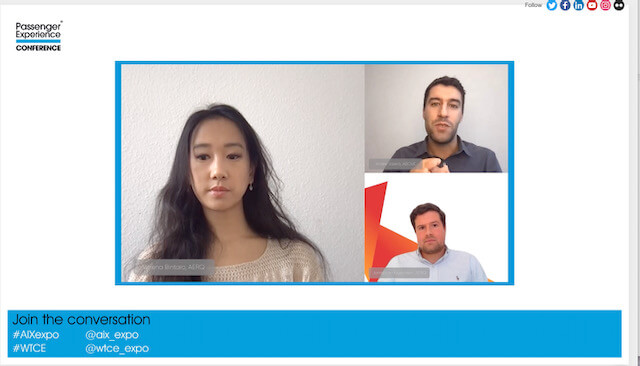 Verena Bintaro, left, moderated a conference session with Andre Valera, Managing Director of ABOVE and Jonas von Kruechten, Head of Strategy and Business at AERQ

The cloud-based media content supply chain service being developed by AERQ and ABOVE promises a one-stop-shop, streamlined approach for airline to access entertainment. The partnership was discussed in greater detail by the two players in a session at this year’s Virtual Aircraft Interiors Expo (AIX) Virtual.

In a session that first aired September 14, moderator Verena Bintaro of AERQ talked with the company’s Head of Strategy and Business Jonas von Kruechten and Andre Valera, Director of Business Development Touch Inflight Solutions, which formed ABOVE with castLabs in 2019. Valera also serves and Managing Director of ABOVE.

Shortly before the start of this year’s AIX/WTCE the two companies announced the future development of the service which they expect to make available to airline customers late in 2023 or early 2024. Through the collaboration, airlines can order media content through a cloud-based solution that once implemented promises to dramatically reduce the time and cost of supplying content to airlines.

The seamless approach of cloud-based access to media content has been discussed and researched for years as a solution to the fragmented process of ordering content for airlines. Up to three months can pass from ordering to the time of delivery to the airline and cost as much as $500 per movie with a many times a one-month run. With a fully implemented process the two men said that time could be reduced days with a cloud-based approach with movies costing one-tenth the amount an airline could now be paying.

Not only would the airlines be able to reduce costs and save time, the two men stressed that content could be quickly switched in and out of an aircraft and tailored to suit the needs of individual passengers and the airline’s route structure. Content that does not engage passengers can be also be quickly removed. The reduced cost and time “will bring much more flexibility to airlines to really play with their content and have route-based content for example and be able to curate content based on different personas,” said von Kruechten.

A successful collaboration like the one between AERQ and ABOVE will allow airline customers to adjust their budgets into other aspects of operation.

“I believe…we will be able to surprise ourselves and unlock business models because we are disrupting, bringing in technology and this will unlock new things,” added Valera.

Though designed as a one-stop-shop service, airlines working AERQ and ABOVE would be able to integrate their existing media and ancillary revenue partners.