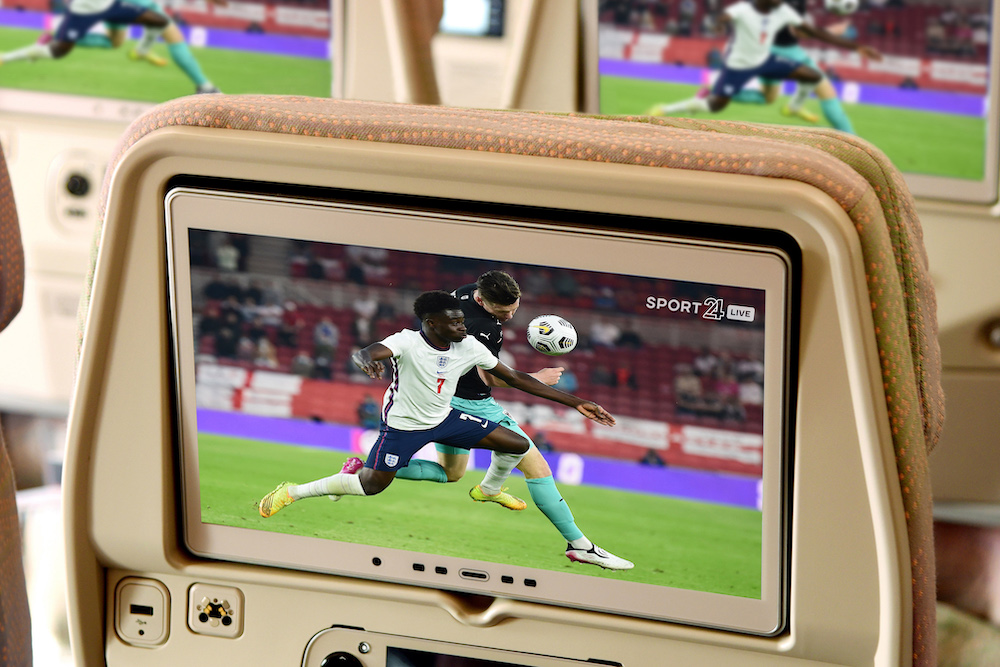 After a 2020 marked by rigorous virus testing, safety protocols and games played in empty stadiums, the world of organized sports might have as much pent-up demand for its products as the travel industry.

A major sporting event, the Indianapolis 500 auto race kicked off Summer 2021 hosting 135,000 fans. In Japan, organizers are moving ahead to deliver a year-delayed Summer Olympics in Tokyo. When it comes to a thirst for live sports, it seems patience is running out and the world cannot wait.

Airlines are announcing daily a return to regular scheduled service, and the complexities of international travel are being worked out one by one for an opening to air traffic between North America and Europe. And perhaps no airline could be more anxious than New York-based JetBlue, which is planning its historic debut to trans-Atlantic competition with its route from JFK to London.

The airline is bulking up on inflight entertainment for its long-range A321s and it is no surprise that a good portion of the content promises to be live sports. The evidence comes from two announcements this spring that exemplify its popularity and the challenges of bringing the content to the passenger.

The earliest news occurred the first week of April, when JetBlue and Panasonic Avionics announced that the airline’s A321LR aircraft carry one channel of Sport 24, a live inflight sports platform that operates around the clock 365 days per year and has content from more than 30 sports leagues. In June, Emirates was also touting its live sporting content from Sport 24 and Sport 24 Extra among the airline’s vast trove of IFE offerings on the ice entertainment system.

This year, passengers can tune into Sport 24 for sporting events, including, but not limited to the NFL, NBA, NHL, all four Tennis Grand Slams, all four Golf Majors, the NRL, the UEFA Champions League, English Premier League and Bundesliga. Airline customers have access to Sport 24 and Sport 24 Extra.

“JetBlue’s commitment to our customers’ onboard experience is one we take extremely seriously,” said Marian Stoyanova, director of product development, JetBlue in the April 6 announcement. “Installing this award-winning live sports platform on our new international fleet of A321LRs will ensure they remain entertained and connected at 30,000 feet.”

Panasonic Avionics makes the 24/7 sports channel available through a partnership with IMG, a company that has been around since 1960 and started with a deal forged with professional golfer Arnold Palmer. The company has grown, supplying programming in sports, events, media, and fashion in more than 30 countries. It also manages and represents athletes and fashion models.

In the announcement of the partnership, Richard Wise, Senior Vice President, Content and Channels at IMG Media acknowledged the possibilities that the pent-up demand will be part of the future as steps are taken to make COVID-19 a thing of the past.

“This new deal also conveys the confidence both parties have in the recovery of the airline industry after the pandemic, especially now that vaccines are being rolled out around the world,” Wise said.

At the start of the pandemic many sports leagues around the world canceled games, so much of the live content wasn’t available, says Dominic Green, Senior Director, Digital Products at Panasonic Avionics. But, he added, IMG quickly moved to fill the channel with highlights and other exciting programming from the archives, and just a few months later brought back full, live coverage, as those events started to return. Also, during the slowdown, IMG worked to secure in-flight rights to even more sports federations.

With even more, live sporting events again accessible in person and on the Sport 24 schedule this year, Panasonic Avionics expects the followers will return in full.

“Evidence shows, that during many high-profile events, a majority of all viewing hours in-flight are spent watching Sport 24,” says Green.

The satellite provider Viasat announced in May that it has entered into an agreement with the National Basketball Association (NBA) to provide in-flight access to the subscription service NBA League Pass. The option is currently available on JetBlue and American Airlines; however, licensing agreements limits the viewership. Flights that originate in the United States, Canada and China and fly to routes outside the country can show NBA games with League Pass, however it is not available for routes within the United States, Canada, and China.

Nonetheless, the service can capture a significant audience. Dave Elliott, Viasat’s Managing Director, Media and Mobile, estimates that international travel that ends in Mexico, the Caribbean or Central America is approximately 20 percent of the scheduled service, which will be able to access NBA League Pass throughout the flight.

“Content partnerships, such as this one with the NBA, use state-of-the-art technology to leverage our bandwidth advantage even further to offer reliable, high quality OTT, live or on-demand, as efficiently as possible,” says Elliott. “We are exploring a variety of content partnerships, including sports programming.”