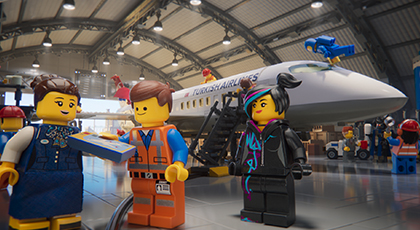 Turkish Airlines has teamed up with Warner Bros. to bring the LEGO® minifigures to life in its latest (and, dare we say, adorable) inflight safety video.

Turkish states that this is the “biggest partnership with the smallest cast ever assembled," teasing the fact that more cross-branding fun is to come. The full campaign will include global TV spots; themed aircraft liveries; an additional inflight and in-airport presence; and a second exclusive safety video.

“As a leading global airline with an emphasis on safety, we are excited to partner with Warner Bros. and The LEGO Movie franchise for this video," said M. İlker Aycı, Turkish Airlines Chairman of the Board and the Executive Committe, in a statement. "We are both brands that are enjoyed around the world, bringing together generations and cultures everywhere. We hope that our passengers can enjoy this new video, which has something for everyone.”

Blair Rich, President, Worldwide Marketing, Warner Bros. Pictures Group and Warner Bros. Home Entertainment, also commented: “We are thrilled to be working with Turkish Airlines again and 'widening their world' to include that of our colorful LEGO Movie universe. The partnership showcases the best of two different brands converging in a clever and imaginative way, connecting to consumers and entertaining them.”

Putting together the short clip was far from a breeze and required the work of a 16-person production team. Other interesting stats from its creation include:

- Two concept artists, three layout artists, seven animators and four lighting technicians brought the story to life.
- Production lasted more than 950 days.
- A total of 2,938,840 LEGO bricks were to create the video.
- More than 9,650,000 CPU (Central Processing Units) hours went into the clip, resulting in 973 versions of animation.
- To cover the 15 models of aircraft in the Turkish fleet, 30 different versions of the video were created, both in English and Turkish.